The feast of Santa Lucia Syracuse 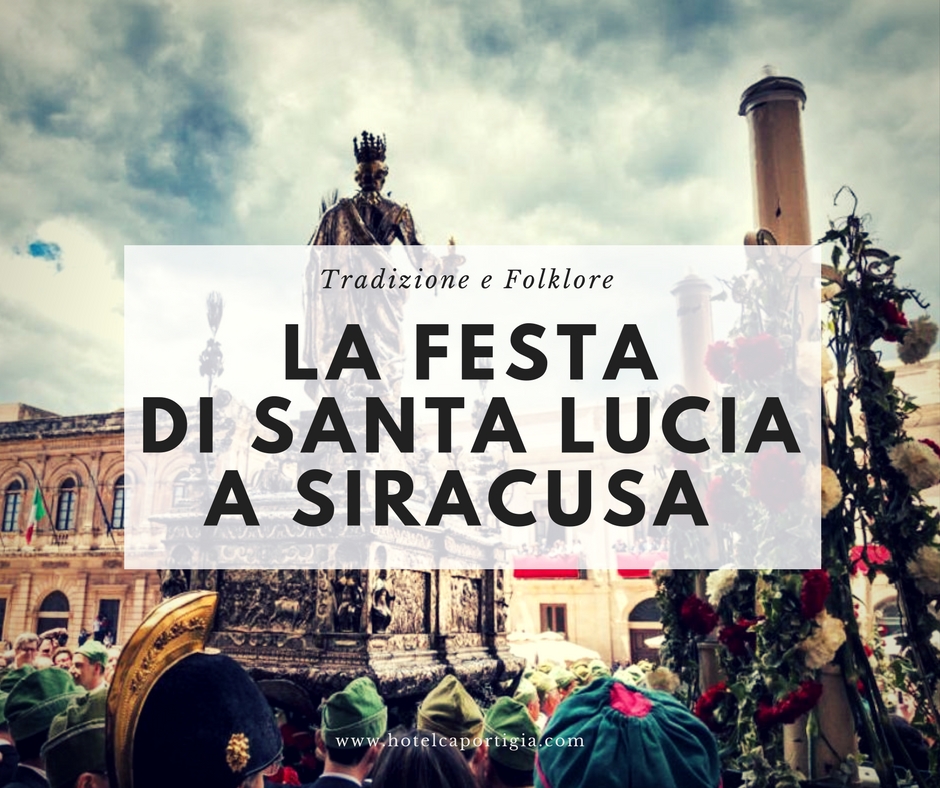 Syracuse celebrates its Patroness twice a year but, without a doubt, the most heartfelt and moving festival is that of December 13, the day of the dies natalis of the Saint. Discover it now with us.

The history of Santa Lucia

Born in Syracuse towards the end of the third century, Lucia was betrothed to a rich pagan merchant, despite the fact that she secretly professed Catholicism to escape persecution. Faithful to Sant'Agata went to Catania to ask her to heal her sick mother but Sant'Agata told her that not only her mother would be healed but she would be sanctified.

This convinced her to refuse the wedding with great anger of the betrothed who had her arrested and even tried to set her on fire. Not even the flames managed to burn her so they decided to behead her and tear out her eyes, which is why Saint Lucia is still considered the protector of sight today.

This happened on December 13, 394 and after the sanctification they erected a church in his honor. However, Santa Lucia performed miracles well after her death, the most famous being the one that gave her the nickname "Santa Lucia Re Guagghie" (in Sicilian Dei Colombi).

In a period of severe famine in May 1646 a dove alighted on the top of the dome of the church of Santa Lucia announcing the arrival of ships loaded with grain and putting an end to the famine. 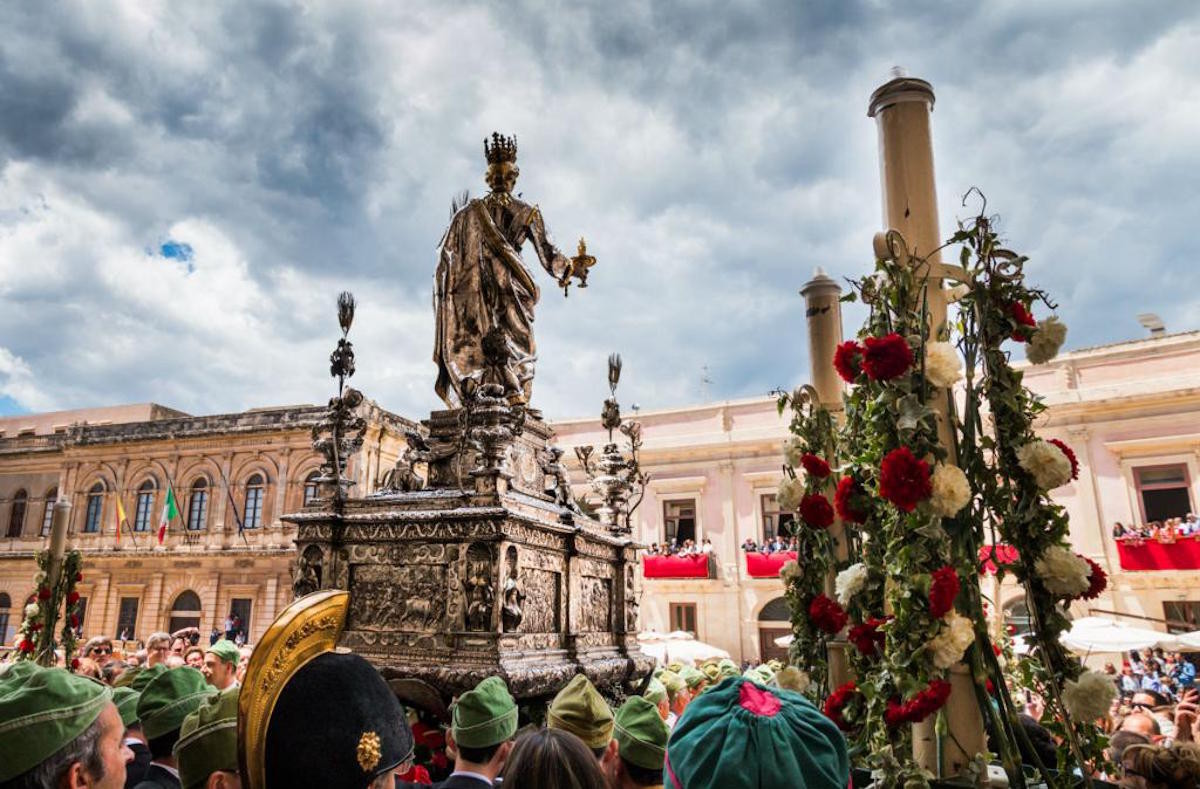 The heart of the party: the Basilica Santa Lucia in Syracuse

The basilica is also the heart of the feast in honor of Santa Lucia, the dies natalis of the Saint takes place on 13 December. It all starts 13 days earlier, on November 30 the band goes around the streets of Ortigia, on December 9 the silver simulacrum of Santa Lucia. it is exhibited in the chapel in the Cathedral and will remain there until 12 December, when the translation to the High Altar will take place.

On 13 December the pilgrimage that crosses the city and brings the silvery Simulacrum from the Cathedral to the Basilica of Santa Lucia al Sepolcro begins. The people are moved to accompany the Patroness to the cry Sarausana jè! . (Siracusana is!) And it is not uncommon to find barefoot people as a symbol of devotion to the saint asking for miracles in return. It is the right time to enjoy the riches that the Basilica offers such as the painting by Caravaggio and the catacombs.

Caravaggio in Syracuse left his mark with his work inside the basilica of Santa Lucia, the Burial of Santa Lucia is an oil on canvas made in 1608 after the escape from the prison of Malta. Caravaggio Santa Lucia retraces the scene in which the saint is buried after the beheading by two gravediggers while the bishop assigns the last anointing.

The Santa Lucia catacombs are located in the homonymous square and you enter from the external portico of the basilica, inside you can see the remains of the old church. 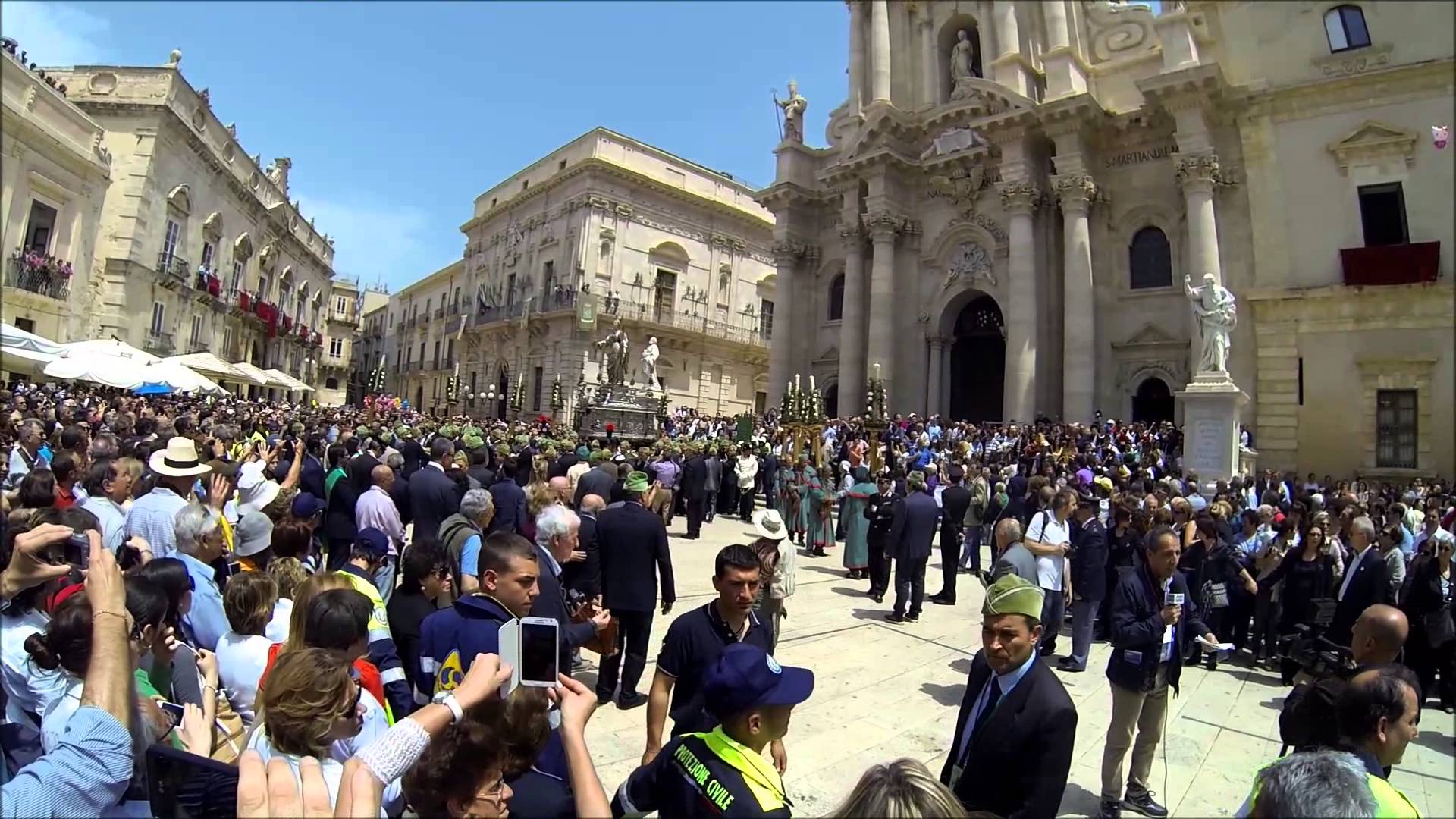 The procession of Santa Lucia in Syracuse is one of the oldest and most heartfelt Sicilian religious traditions and, together with the feast of Santa Rosalia in Palermo and Sant'Agata in Catania, it is those that attract the greatest number of participants.

In the early afternoon, the silver statue of Saint Lucia, kept in the cathedral of Syracuse, is taken over by the brotherhood of bearers and left the church for the traditional procession through the city that will last until evening.

The statue is carried on the shoulders and in turn by a special brotherhood of bearers, called the “green berets” because of the The green berets wear Santa Lucia in the color of their headdresses. In ancient times it was the brotherhood of carpenters but today this role is open to everyone and, for some years now, also to women who have been entrusted with the task of carrying the relics of the Saint.

The square, at the time of the exit of the statue of the saint (around 15) is filled beyond belief and the moment in which the silvery simulacrum crosses the door of the cathedral is accompanied by fireworks. Then, slowly, followed and preceded by an immense crowd of faithful, the procession sets off on its traditional path in the direction of the Arethusa spring.

After passing Largo Aretusa, the procession of Santa Lucia heads towards the exit of the island of Ortigia, passing through the Porta Marina and crossing the Umbertine bridge and then onto Corso Umberto.

In the middle of Corso Umberto the procession takes place on Viale Regina Margherita to reach the "borgata Santa Lucia" which together with Ortigia represents the second historical district of Syracuse.

The procession of Santa Lucia reaches the square around dinner time and then concludes its journey towards the basilica of Santa Lucia al sepolcro. There it will remain on display for a week, until December 20, the day of the octave, when a new procession on a different path will bring the statue back to the cathedral where it will remain for the rest of the year, in the chapel of the same name.

On December 13th, throughout Sicily, no bread and pasta are eaten, but only legumes and vegetables, as a sign of penance: this tradition has ancient origins dating back to the terrible famine that struck Sicily in the eighteenth century and which ended thanks to the miraculous intervention of the holy martyr who had a fleet of ships loaded with wheat conveyed to the island.

Since then it has been common in Sicilian families to eat the "cuccìa" seasoned with ricotta cream and cooked wine.

In ancient times, devotion to Saint Lucia was shown, eating exclusively the cuccìa (which derives from the term cocciu, small thing, grain), which was distributed to family, friends and neighbors. 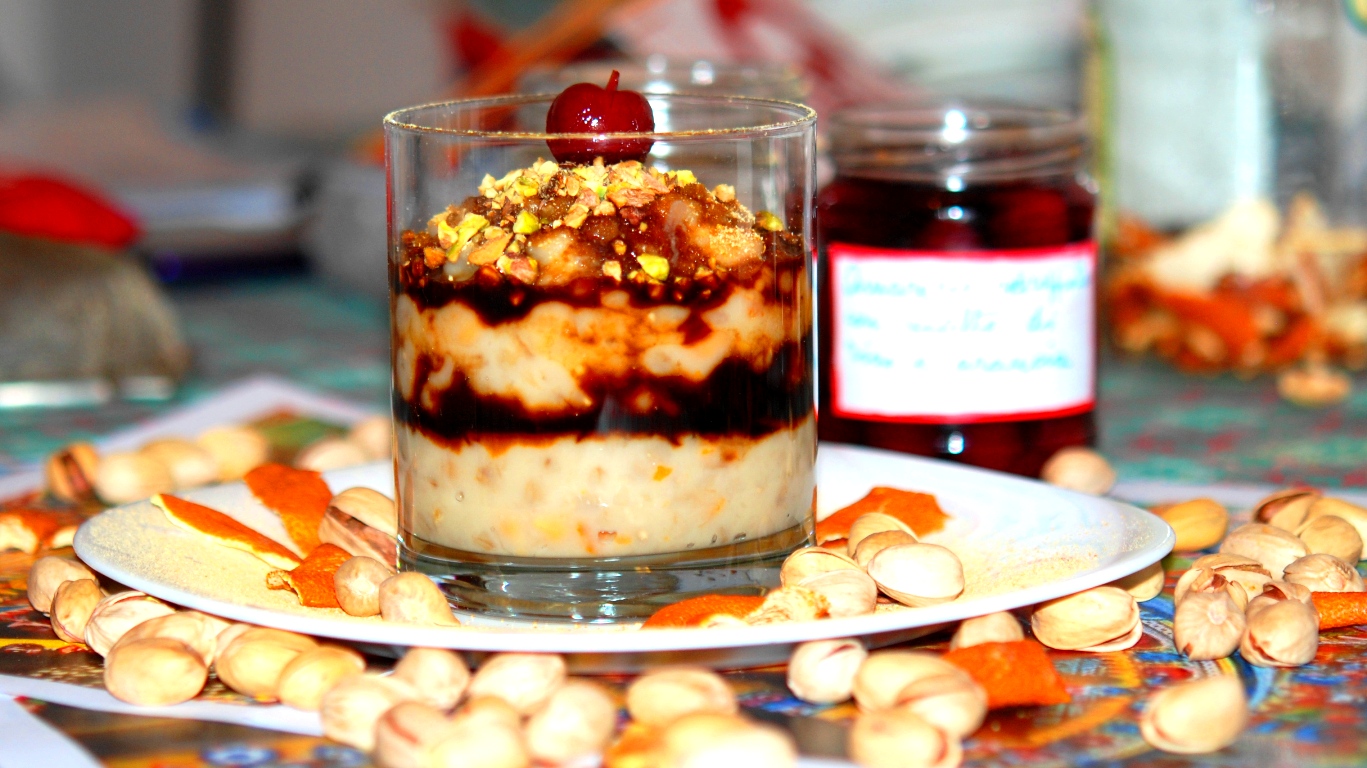 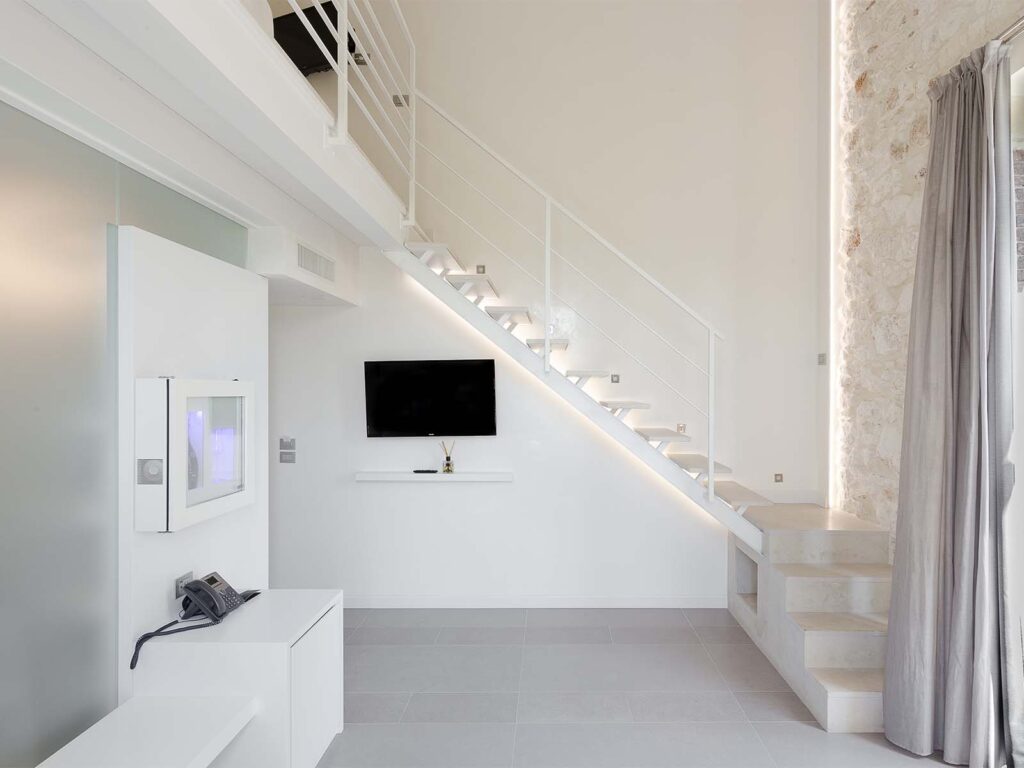 Skilfully crafted by expert craftsmen, the rooms of the Caportigia Boutique Hotel are designed to treat yourself to a relaxing stay and a rejuvenating sleep. Elegantly furnished and enriched with refined details, our rooms are equipped with all the necessary comforts to ensure relaxation and well-being.
Read more 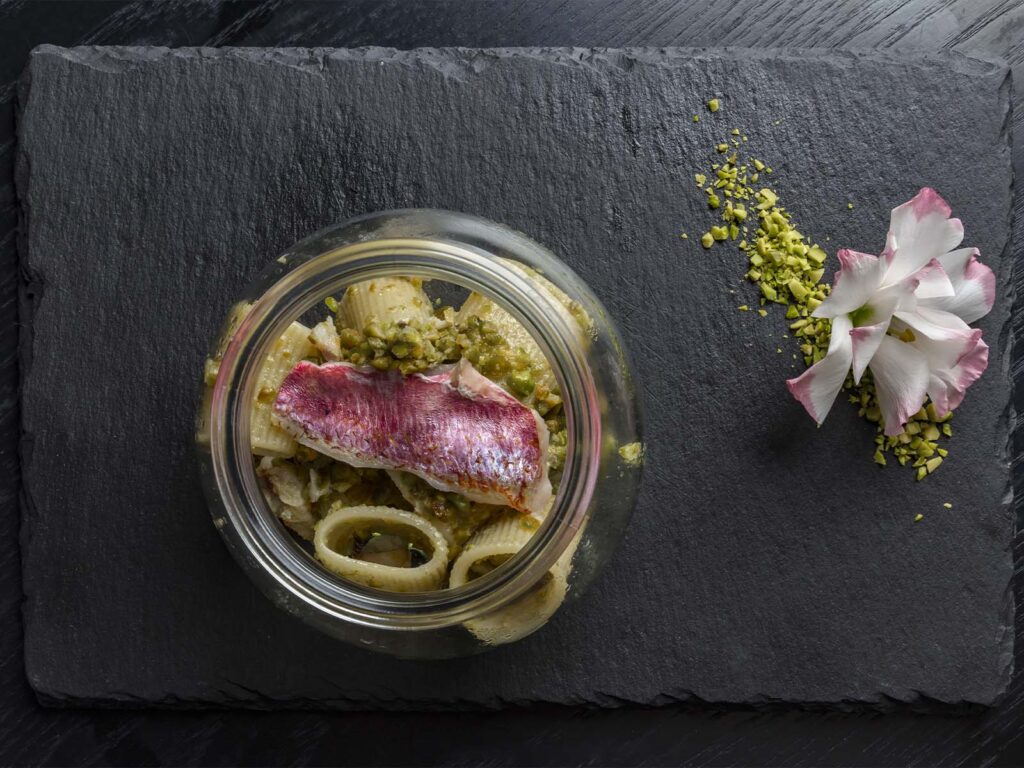 Il Tiranno welcomes you in a completely new place, the Caportigia Boutique Hotel, with a refined and refined design, which combines exclusivity and elegance with the familiarity of the place. The atmosphere is intimate but dynamic, where you can savor the most sophisticated cuisine based on fresh fish.
Read more 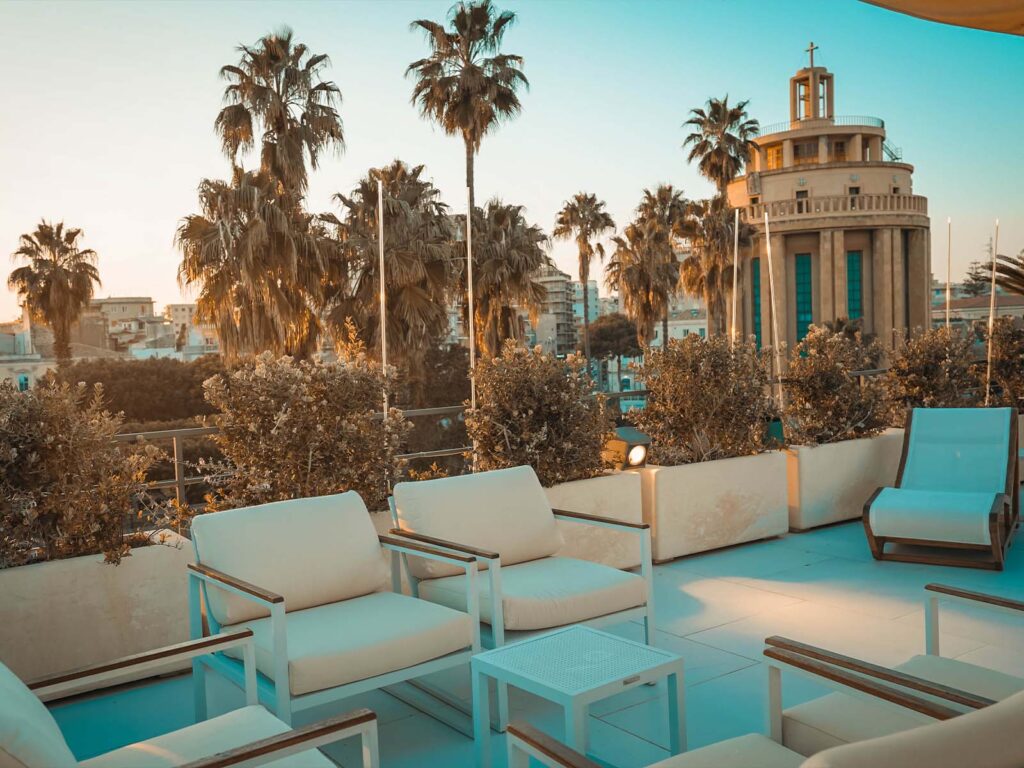 Located in the central Umbertina area, the Caportigia Boutique Hotel grants its guests the opportunity to easily reach all the attractions of Syracuse, even on foot. Shops, restaurants, churches, museums and many other places of interest located in the area around our structure.
Read more

To quickly contact Caportigia or to request more information, you can send any requests to the email addresses indicated or use the appropriate form. We will reply to you within a very short time. Our staff, in addition to the Italian mother tongue, speaks English, French and Spanish fluently.
info@hotelcaportigia.com